First found in the Truro, Cape Cod.  I found some of them growing under pitch pine.  The stem on them is deep rooted so that the mushroom cap appears to be laying on or near the surface.  Others I found growing in Bearberries.  On Cape Cod, it appears that many species of mushrooms associate with this berry.  Since this berry is a trailing evergreen shrub, the Matsutake has some difficulty pushing through.

Here is a young mushroom as it appeared growing: 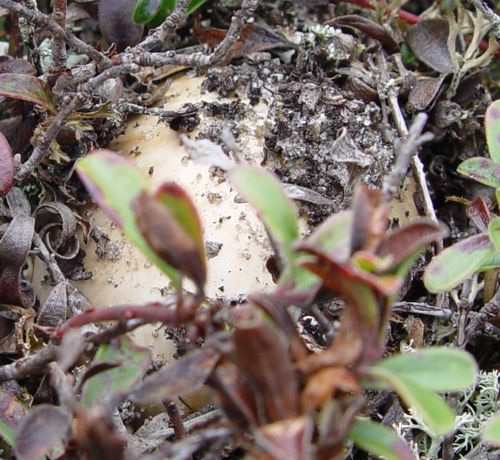 It is covered by the debris and sand and only part of the cap is visible.

After I moved away the berry plants and debris, here is what it looked like: 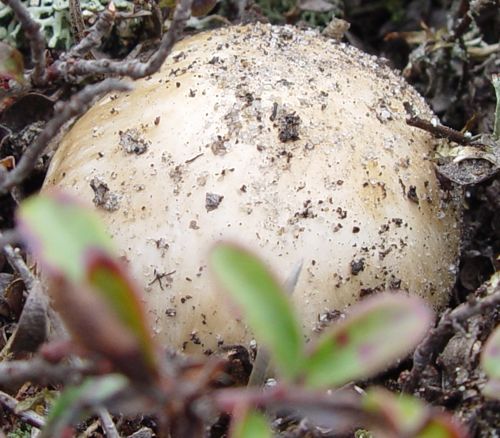 The cap is sitting on the ground even though the mushroom has a good sized stem, as seen on the next picture: 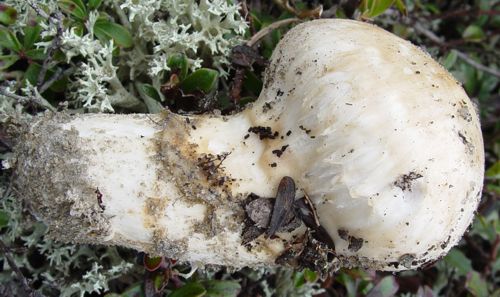 This next picture shows the vale broken but still hanging on: 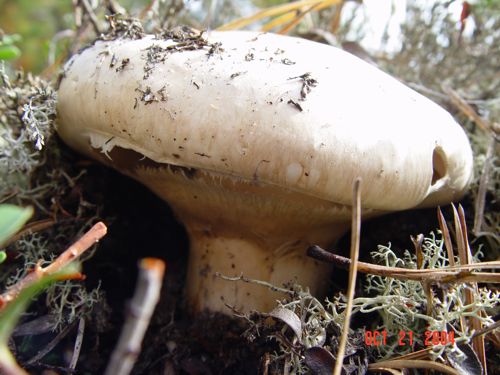 Below is a mature Matsutake.  No stem is visible. 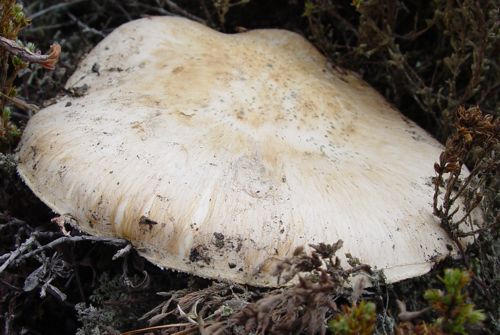 And here is the underside: 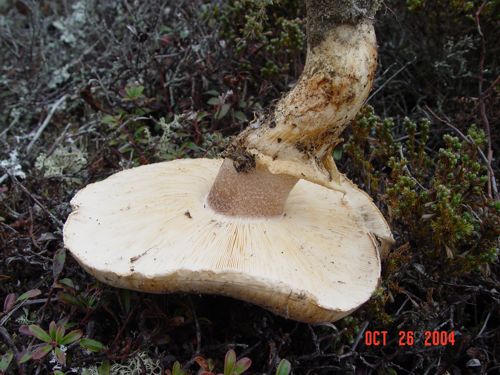 The best way to identify it is by memorizing its basic features as given in a good guide..

Matsutake mushrooms have been revered as gifts in Japan for centuries, as they symbolize fertility, prosperity and happiness. One of the earliest records of Japanese matsutake is a 759 A.D. poem celebrating its virtues. During the 13th – 17th centuries, the nobility would organize matsutake forays and send their harvest to important people or loved ones. In the 17th to 18th centuries, consuming matsutakes was limited to the imperial court, but eventually the practice became more common among the public. During 1636 – 1667, a Buddist monk in Kyoto recorded the annual production of matsutake in a specific forest and based on this account, Professor Hamada of Kyoto University was able to approximate the seasonal precipitation, temperature conditions, age and ecological status of the forest at that time. By the early 1980’s, Japanese matsutake production was in serious decline and imported matsutakes from Korea were required to meet Japanese demand. This decline was precipitated by the invasion of the pine nematode, which attacks the black and red pines that serve as hosts to T. matsutake. Moreover, there was a change in Japanese forest management, which increased the mushrooms decline. For centuries, understory shrubs and oak trees were harvested for charcoal, which allowed the shade intolerant pines and its associated matsutake to thrive. After World War II, the traditional charcoal-burning stoves were replaced by natural gas ones, which resulted in the diminished removal of woody shrubs. Pine seedlings are therefore unable to compete in the dense understory which favors non-matsutake shade tolerant hosts. As the mature pines die from nematode attack, the seedlings are unable to become established which results in the disappearance of the matsutake. To meet the increasing demand for matsutake mushrooms, it was necessary to import similar species from North America (T. magnivelare), Europe and North Africa (T. nauseosum = T. matsutake).

The mushroom’s distinctive odour can be identified from the belowground mycelium and experienced pine mushroom pickers can smell the fungus in a stand even when there are no mushrooms. Scientists have isolated 78 volatile flavour compounds, of which 22 have been identified, from Tricholoma matsutake. Methyl cinnamate, (a pleasant sweet odour) in combination with 1-octen-3-ol, (a musty or spicy odour) isolated from T. matsutake are the prime contributors in giving this mushroom its distinctive odour.

These compounds have been shown to aid in human moisture retention and stimulate circulation, and have antibacterial, antifungal and anticarcinogenic properties. Carbohydrates and proteins isolated from T. matsutake are reported to reduce sarcomas and other tumors. When T. matsutake is steeped in water overnight, the solution is used as a face wash to remove any darkened facial spots and wrinkles. Alcoholic extracts of T. matsutake are rich in songyic acid, which is used as a skin-whitening agent. Ethylene glycol, a major component of anti-freeze and aircraft deicing compounds has been isolated from T. matsutake in significant amounts.

It was proposed that T. magnivelare, be listed as endangered by the Convention on International Trade in Endangered Species, a branch of the United Nations Environment Program. However, both amateur and professional mycologists as well as the proponents for listing the pine mushroom failed to discover any documentation showing a decline in pine mushroom populations. As a result, the proposal was disregarded.